Pencelli Castle, built around 1080 A.D., had changed hands several times by the 14th Century through conflict. The last Royal occupier was Gwladus Ddu, Princess of North Wales, 1205-1251 A.D. who died at Windsor Castle. She was the daughter of Llywelyn the Great, Prince of Wales and also the Grand daughter of King John, King of England, on her maternal side. In 1215 A.D. she married the owner of Pencelli Castle, Reginald de Braose who already had a son William from a previous marriage. Upon Reginald’s death she married Ralph Mortimer of Wigmore Castle, Herefordshire, and they had a son, Roger, who inherited the Lordships of Pencelli and Brecon Castles along with thousands of acres of land and the rights to collect taxes within these areas. This angered William de Braose who attacked the castle, unsuccessfully, but caused great structural damage. The Castle was repaired and to settle the dispute Roger agreed to marry William’s daughter, Maud de Braose, therefore bringing the wealth back to the de Braose family.

Roger de Mortimer was a renowned and honoured Knight and close friend to Henry III. He fought alongside him at the Battle of Evesham against Simon de Montfort. Roger killed Simon de Montfort, severed his head and sent it home as a gift to his wife, Lady Maud de Mortimer. 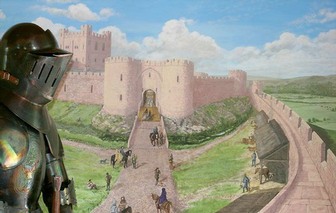 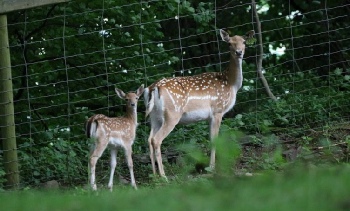 The picture depicts Pencelli Castle in 1275 A.D. The badly damaged gatehouse had been repaired two years previously and the outer curtain wall recently built. The castle was held by Roger Mortimer.

Since the castle was not built on top of a steep hill it could easily be attacked and when gunpowder became widely used the stronghold became un defendable.  The castle, built around 1080 A.D. had changed hands several times by the 14th Century through conflict.  It was already in bad repair and now fell into disuse.

The caravan and camping park lies within and around the defensive moat, part of which was utilized with the construction of the canal. The Oaks and Meadow, which were probably the scene of several bloody battles, are now surrounded by mature trees, many of which span several centuries. The Orchard is within what would have been the castle walls.

All remains of the Castle have long gone and the house, which occupies the site of the old chapel, St. Leonard’s, dates back to 1583 A.D.

The Caravan & Camping Park was established in 1990 by Liz & Gerwyn Rees. Liz played a pivotal role in the success of the business for 26 years growing it to what it has become today. It was heart-breaking when she passed away in August 2016. She led by example always and worked tirelessly. This gives great determination to Gerwyn and their two sons Craig and Morgan, to continue to keep the high standards she instilled into everything she did. To quote Liz, the park will continue to “Keep the wheels turning” in her name.